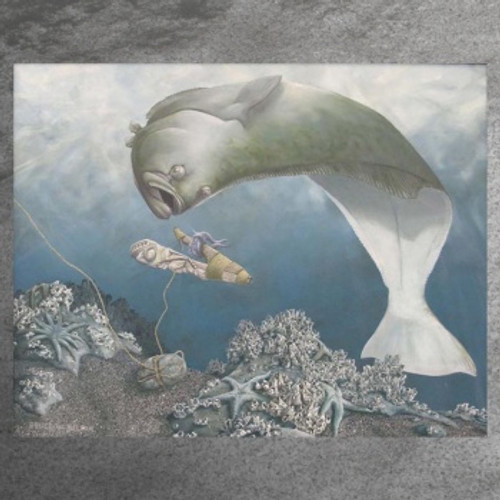 This print of an oil painting by Kodiak artist Bruce Nelson, titled Alaska Native Tribute. This print shows a halibut approaching an Alutiiq-style halibut hook on the sea floor. The original painting, as well as the real-life halibut hook, are owned by the Alutiiq Museum.

Painted in the autumn of 2008, Alaska Native Tribute shows a halibut approaching a baited hook resting on the sea floor. From the use of a grooved cobble anchor, to the orientation of the hook in the water, the use of squid bait, and the way the line is secured to the anchor with a slipknot, the hook appears in ethnographically accurate detail. This image provides a beautiful summary of Alutiiq halibut fishing technology - illustrating hook, line and weight in use, in the environment in which they were used, and with the prey they effectively harvested.

He visited the Alutiiq Museumâ™s collections in the summer of 2008 to study Alutiiq fishing gear and consult staff about halibut hooks. At the museum, he also studied a rare, wooden, historic hook, in the Alutiiq Museumâ™s permanent collection. Collected in Old Harbor in the 1950s, this hook is made of spruce, yellow cedar, cotton or hemp rope, and a square cut iron nail. It features carvings of a halibut with a bird on its back, and appears to be over 100 years old.